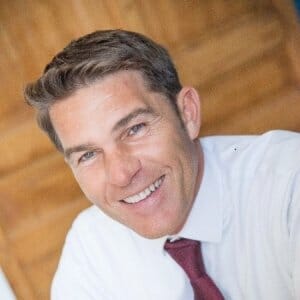 With a background in economics (MBA, Master in Economics, Business Law (CFPA) and Risk Management (ARM 54), began his career as a consultant for the Andersen Group in Milan and then Paris. He has developed skills in negotiating and drafting international commercial contracts, in particular in mergers and acquisitions for large companies with a turnover of more than €150 million, as well as for banks.

In 1997 he launched an internet start-up, an insurance comparison tool for professionals.

In 1998, he was recruited by a French bank to set up a full M&A department and define the group’s policy for the board of directors.

In 2002, he launched the company Actoria, specialized in business transfer consulting. The reason for this company was the incessant requests from SME entrepreneurs who contacted him to ask him to recommend a good transfer professional because they complained at the time, almost 25 years ago now, that the players in place were not professional. In this SME market at the time, it was not uncommon to find converted real estate agents or property dealers.

When Actoria was launched, the techniques and tools used for larger-scale operations were taken over and lightened to adapt them to the SME market.

For the first time, real specifications were proposed to entrepreneurs and rigorous preparation processes with in-depth financial expertise, economic diagnosis and the drafting of very complete presentation files were systematized.

In addition, Actoria quickly positioned itself internationally by opening offices in Paris and London.

In 2013, the Actoria Group decides to open an office in Morocco.

All the companies of which he was a director have always been profitable to date and none of them have disappeared.

Fabrice Lange, throughout his career, has had the opportunity to accompany hundreds of business leaders from 1 million to 250 million turnover, which allows him to have a global vision of the market. Moreover, having worked very early on international files, he has a good knowledge of the practices and issues specific to each European country but also to the peace in North Africa.

His privileged relationships with many business leaders and professional networks allow him to gather around the Actoria Group many skills.